(g+)economics in the news (continued)

MarketWatch: One reason the stock market has been so dang resilient (21/07/2016)

Bloomberg Best: Why Draghi's Interest Rate Comments Are So Important (02/06/2016)

The Telegraph: Britain courts fate on Brexit with worst external deficit in history (31/03/16)

Dow Jones: US dollar remains under pressure after Yellen and Draghi (31/03/16)

Bloomberg Radio: Komileva: Fed is Risk-Dependent - Dollar funding is critical for market volatility and economic health this year. That’s according to Lena Komileva, Chief Economist and Managing Director at G+Economics who spoke to First Word Europe’s Guy Johnson and Jonathan Ferro, as investors digest uncertainty surrounding the next Fed rate hike. She explained that the Fed policy bias is risk-dependent, despite the central bank iterating its data focus (29/03/16)

Bloomberg Surveillance: The necessity & side effects of negative interest rates (07/03/16)

Bloomberg Surveillance: Brexit is weighing in on investor sentiment (07/03/16)

The Independent: Strong US jobs figures spark talk of another rise in rates (05/03/16)

Citywire: Royal grumble: why the Queen would question messed up markets (26/02/16)

Bloomberg TV: Negative Interest Rates: a Risky Move for the BoJ? Lena Komileva, managing director and chief economist at G Plus Economics, discusses the Bank of Japan adopting negative interest rates and what it means for the economy. She speaks to Bloomberg's Anna Edwards and Manus Cranny. (29/01/16)

MarketWatch: Bank of Japan’s negative rate decision is a mark of ‘desperation’ (29/01/16)

Greece: Markets Need to Get Ready for a Default – BBC

BBC Breakfast: The Greek election result 26 Jan 15 -"What Syriza is proposing is radical, but there's no certainty about how it can be funded"

"What Syriza is proposing is radical, but there's no certainty about how it's going to be funded" - Lena Komileva pic.twitter.com/0GaXE7tkJ7 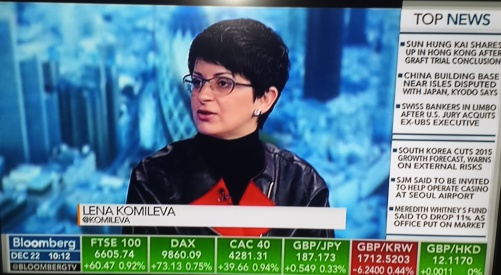 Dec 22 (Bloomberg) - Lena Komileva, managing director at G Plus Economics, says that Russia's foreign reserves are "dwindling" and as a result of European Union sanctions against Russia, the country "cannot rely on foreign trade or capital markets to replenish that shortfall." She speaks to Guy Johnson on Bloomberg Television's "On The Move".

European CEO: The Eurozone crisis isn’t going away any time soon. European CEO caught up with Lena Komileva of G+ Economics to find out where the trouble spots are for the Eurozone and what countries are leading its economic recovery (27/11/15)

25 June (Bloomberg) - Greece: Markets Need to Get Ready for a Default: Komileva

Citywire: How China’s economic miracle could end in domino effect of defaults (08/10/15)

Citywire: The day after the Fed raises rates and the effectiveness of the ECB's QE (08/10/15)

Foreign Policy: Another Bailout Won't Keep Greece in the Eurozone (14/08/15)

Bloomberg TV: G Plus Economics Chief Economist Lena Komileva discusses U.S. interest rates and when she thinks the fed will raise them. She speaks to Bloomberg's Anna Edwards on "Countdown"  (24/06/2015)

Reuters: US yields rise to three-week peaks in line with German bonds (03/06/15)

FT: Hard Currency podcast - G+ Economics’ Lena Komileva says it is The Waiting Game for the US Dollar when it comes to the Fed’s first rate hike (23/04/15)

MarketWatch: Investors may be ignoring potential ‘collateral damage’ from Greece (20/04/15)

The Telegraph: Defiant Greece at daggers drawn with EU creditors (10/03/15)

Bloomberg: ECB Bond-Buying Plan Has Investors Questioning How It Works (01/02/15)

The Times: Election shortens the odds of Greece exiting the euro next year (30/12/14)

The Telegraph: Greece comes back to haunt eurozone as anti-Troika rebels scent power (29/12/14)

The Telegraph: Mario Draghi's efforts to save EMU have hit the Berlin Wall (06/11/14)

Bloomberg: ECB Drops Anchor as Deflation Looms (03/10/14) - Lena Komileva of G+ Economics was the first economist in the market to highlight that the ECB has dropped its historic reference to "anchored" inflation expectations.

Business Standard: Post-referendum, cost of keeping Scotland in the UK likely to rise (19/09/14)

MarketWatch: Fed says it will be ‘considerable time’ before rates are lifted (17/09/14)

Reuters News: Why the world should care about Scottish independence (09/09/14)

Bloomberg: Why Markets Are Voting 'No' to Scottish Independence (08/09/14)

This is Money: Economic revival leaves Bank money-printing on pause - and economists searching for clues on when rates might rise (31/07/13)

Bloomberg guest column: Komileva on the need for Davos attendees to avoid a false sense of security (23/01/2013)

Tom Keene on Bloomberg Television's "Surveillance Midday”: ﻿Lena Komileva talks about the outlook for ECB policy, the debt crisis and its global impact, and the implications of a potential Greek exit from the euro (14/05/12)﻿

BBC World Service: What will the Spanish bailout mean? Lesley Curwen talks to Bob Parker, senior adviser to UBS, and Lena Komileva of G+ Economics, about the implications. (11/06/12)﻿ ﻿

CNBC: Lena Komileva, chief economist at G+ Economics, tells CNBC, "Spain will resist a bailout for as long as possible because of the politics involved." (08/10/12)

Barron's: A Romance That Lingers On﻿ - US Treasuries still hold allure for investors (29/12/12)

Bloomberg TV: Lena Komileva, chief economist at G+ Economics, talks about the Greek debt crisis and the country's future in the euro zone, with Maryam Nemazee on "The Pulse." (20/08/12)﻿ 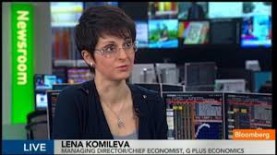 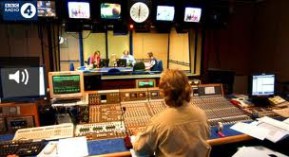 BBC News: Germany's AAA credit rating on 'negative outlook': Jim' O'Neill of Goldman Sachs Asset Management and Lena Komileva of G+ Economics agree on the implications of the latest developments for the Eurozone (24/07/12) ﻿﻿

BBC Radio 4: Lesley Curwen talks to Lena Komileva on the European market contagion and the outlook for policy (24/07/12)

WSJ: Economic Unease Looms After US Election; Fears about the fiscal cliff - video (07/11/12)

CNBC: The Euro is Breakable: Lena Komileva, chief economist at G+Economics: "The euro is breakable, maybe not now, but certainly not never”﻿ (23/07/12) 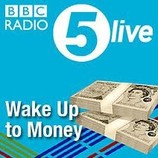 BBC 5 Live's "Wake up to Money": A European Tipping Point? As the eurozone crisis continues Germany is threatened with a possible downgrade of its triple A-rated economy, Greece is bracing itself for an audit by its lenders and Spain and Italy have banned short-selling of shares. Lena Komileva talks to Jemery Nailor (24/07/12)﻿

Financial Times: ﻿How Low Will Bond Yields Go? Lena Komileva predicts that the rally is Bunds is not over yet. (27/06/12)﻿

FT Opinion: Markets will soon pivot to focus on sustainability of recovery (25/03/2021)

Bloomberg TV: 2021 Will be the `Bounce Back' Year for Inflation - January is shaping up to be a pivotal month in determining whether the nascent U.S. reflation trade can really gather steam in 2021. "Every single bit of the market is telling us that there is an excess of financial overhang of inflation that's just waiting to ripen as we move out of the pandemic," G+ Economics Managing Partner & Chief Economist Lena Komileva said on "Bloomberg Markets: European Open." (04/01/2021) 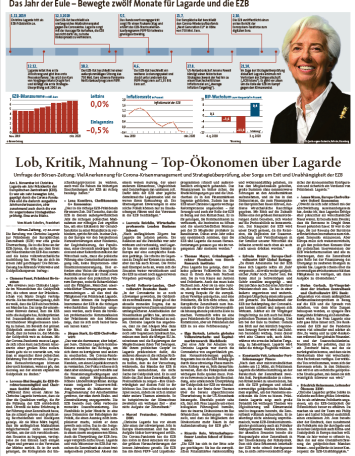