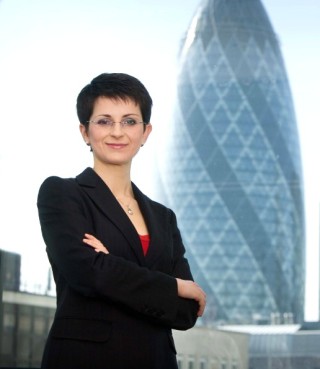 Lena is the Chief Economist and Managing Director of G+ Economics, an international market research and economic intelligence consultancy based in London. Previously she was Senior Vice President and Global Head of G10 Strategy at Brown Brothers Harriman, a private US custodian bank, and Director and Global Head of G7 Market Economics at Tullett Prebon, No1 Broker for Currencies in the 2010-2011 Risk Magazines rankings and the biggest government bonds broker in Europe.

From the position of a top-down macro-economist with nearly two decades of experience in the heart of global capital markets, Lena writes on a variety of economic themes related to US, Euro area and UK fundamentals, policy, financial markets, capital flows and systemic links in the global economy. She was among the very first to argue the global implications from the securitisation crisis in the summer of 2007, including the dislocation of money markets, next-to-zero G7 monetary policy rates, the Great Recession and the new role for public capital in the functioning of financial markets with the worrying side effects of long-term public debt sustainability and global financial inflation pressures. Her product expertise lies in foreign exchange, money markets and government debt, while monitoring and analysing relationships with other markets such as volatility, credit derivatives, equities, commodities and emerging markets. Lena is a frequent contributor to the quality financial media and is regularly invited to speak at international industry forums.

Lena Komileva was one of the very first economists to draw the link between a systemic regime change in global market dynamics, credit multipliers in real economies, recession risk and the central bank response in early 2007. After accurately calling the end of the Fed tightening cycle in response to subprime stresses in February 2007, months ahead of the consensus, she wrote about the “impending credit crunch” on 1 June 2007, as stress signals from US subprime securitisation sectors reached European bond market volatility gauges, accurately predicting the balance sheet risk transmission from debt to equity markets and the collapse of the FX carry trade over the weeks that followed.

By January 2008, her economic model showed 85% probability that the US was already in a recession – twelve months before the National Bureau of Economic Research (NBER) confirmed it. As “dislocated money markets” – a term that Lena coined in the summer of 2007 - defied central banks’ short term liquidity stabilisation measures – Lena’s article in FX Week in March 2008, arguing that the disconnect between elevated emerging market asset valuations and riskier developed market credit impulses was unsustainable, became a prophesy for the steady rise and dispersion of market volatility in the summer of 2008. This ultimately culminated with the collapse of Lehman and the nationalisation of US mortgage markets in 2008, and the start of a new era of central bank policy making that centred on balance sheet size, market liquidity risk premia and deflation tail risk probability management, over traditional rate and inflation targeting.

For the past decade, Lena’s early “lower for longer” calls on market rates, against repeated consensus calls for early tightening from the Fed, the ECB and the BoE in the years between 2009 and 2014, preceded the steady flattening of the US and European core government bond yield curves.

In recent years, Lena has repeatedly warned that the decoupling between the US business and financial cycle is harbouring distortions in US and global risk asset pricing, with significant consequences for the economic risk cycle. Her early calls on market policy mispricing and peak cycle dynamics over the course of 2017, and in particular her call that US 10yr yields are unjustifiably low in August 2017, have resonated strongly with the shift in the global policy tide over the past year and the return of market volatility in 2018.

Today Lena advises top tier investors, CEOs and Exec Boards on financial, macro-economic and policy developments across core G+ markets, as managing partner and chief economist at G+ Economics, an international market research and economic intelligence consultancy based in London. With over two decades advising CEOs in banking, custodial, wealth management and legal and regulatory consulting services as head of market economics for the largest European government bonds broker in the world, Lena a regular voice at policy and industry forums, and an economic adviser, working with such institutions as the CFA Institute, the World Gold Council, McKinsey & Co., and the UK Parliament among others. Lena is a regular contributor for Bloomberg, the Financial Times, the Wall Street Journal, Reuters, and the BBC, and a leading independent voice in the international policy debate on global growth themes focusing on market efficiency, international capital flows and monetary analysis.

With a wealth of experience advising top-tier institutional and policy clients, Lena has written extensively on US, UK and Euro area fundamentals combining financial, monetary and macro-economic analysis.

Her focus is on analysing the flow of funds between the financial industry - including the banking sector and wholesale asset markets - and the real economy, and its impact on economic and financial stability and policy. Lena was among the very first to argue the global implications from the securitisation crisis in the summer of 2007, including the dislocation of money markets, next-to-zero G7 monetary policy rates, the Great Recession, the Eurozone crisis and the new role for public capital in the functioning of financial markets with the worrying side effects of long-term public debt sustainability and global financial inflation pressures.

In addition to thematic strategy and economic analysis and forecasting, her product research focuses on foreign exchange, money markets and government debt, and the relationships with other asset classes such as volatility, credit, credit derivatives, equities, emerging markets and commodities.

Lena is a frequent contributor to Bloomberg, Reuters, Financial Times, the BBC, the WSJ among others. She is regularly invited to present at market industry forums and has contributed articles to Bloomberg Brief, the Financial Times, Reuters, FX Week and others. Her research has been extensively quoted in the international press and she gives regular TV and radio interviews. 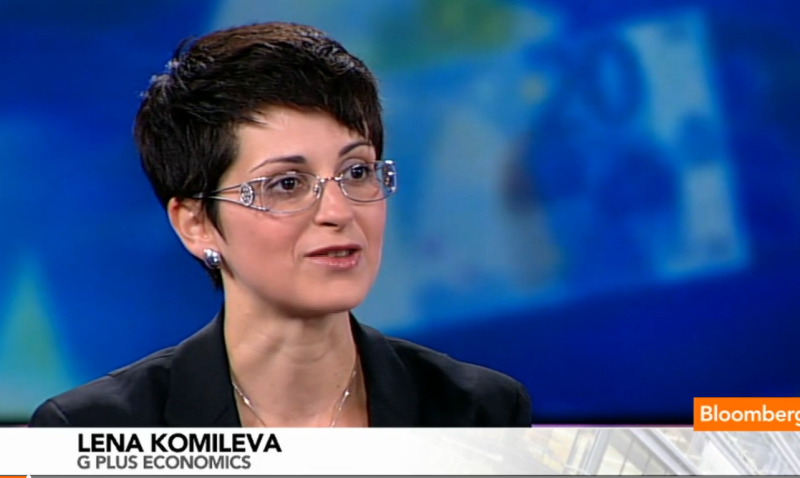 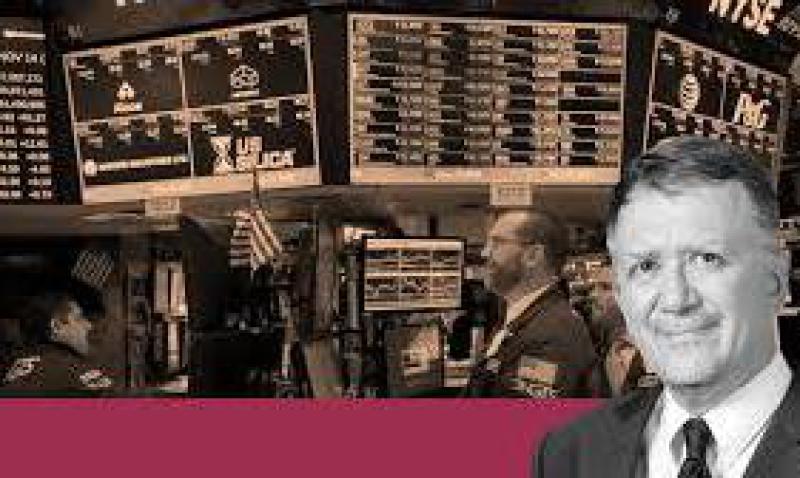 FT Video: Is the world really ready for higher rates?

Is it time to ease the world economy off zero rates? Lena Komileva, chief economist at G+ Economics, argues to FT editor John Authers that productivity, employment and inflation remain low, while leverage has rebounded, so central bankers should be very careful. (Source: www.ft.com) 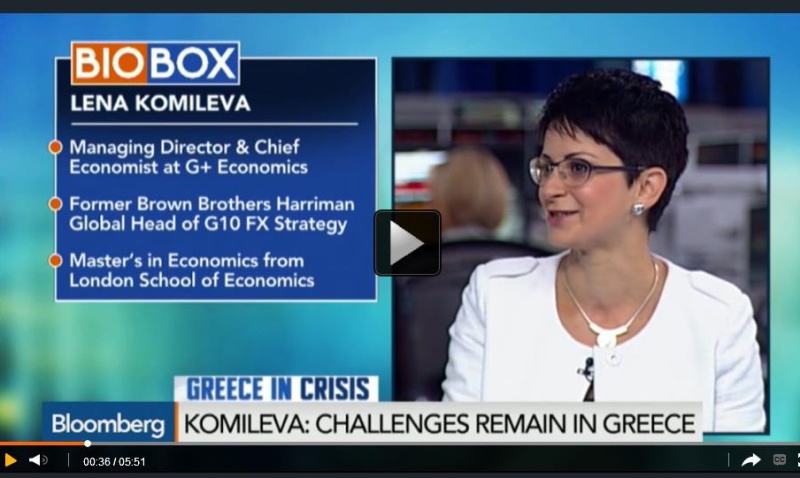 Bloomberg TV: Greece Is More Out Than In the Euro Zone - Komileva 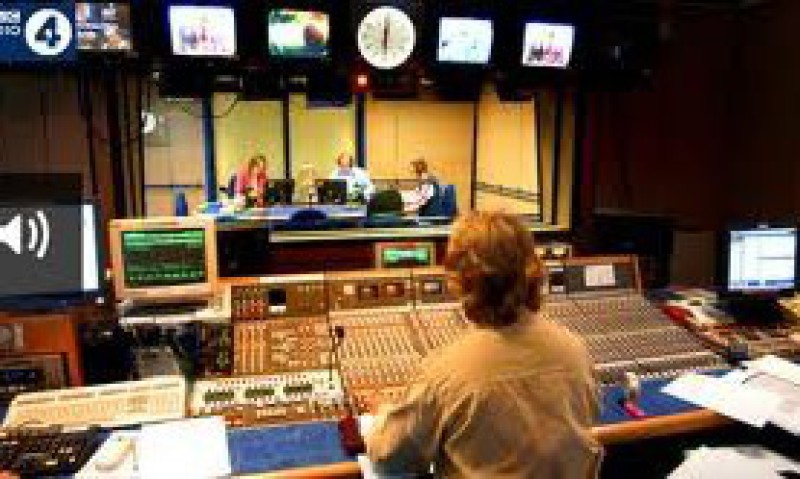 Bloomberg TV: Fed Should Be Proceeding Towards Normalization Says G Plus' Komileva 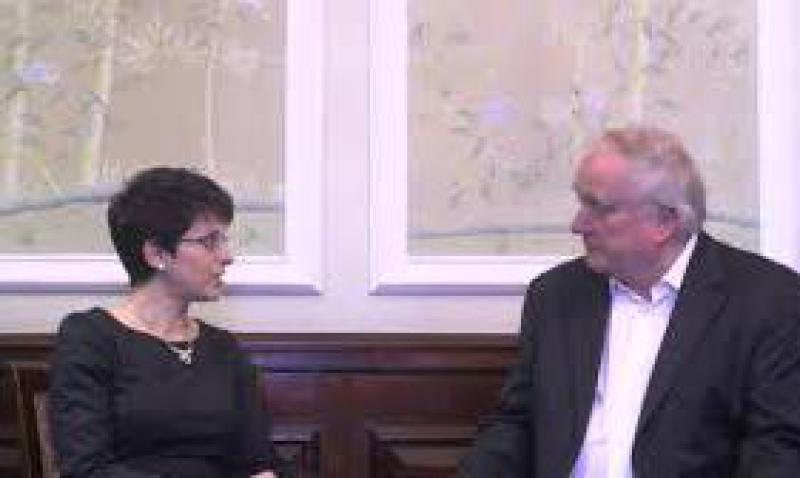 Think tank discussion with the Centre for the Study of Financial Innovation: Lena Komileva on European currency markets

Lena Komileva, founder and chief executive of G+ Economics, sat down with CSFI director Andrew Hilton following the Centre’s March 18 round-table on the state of the European currency markets. 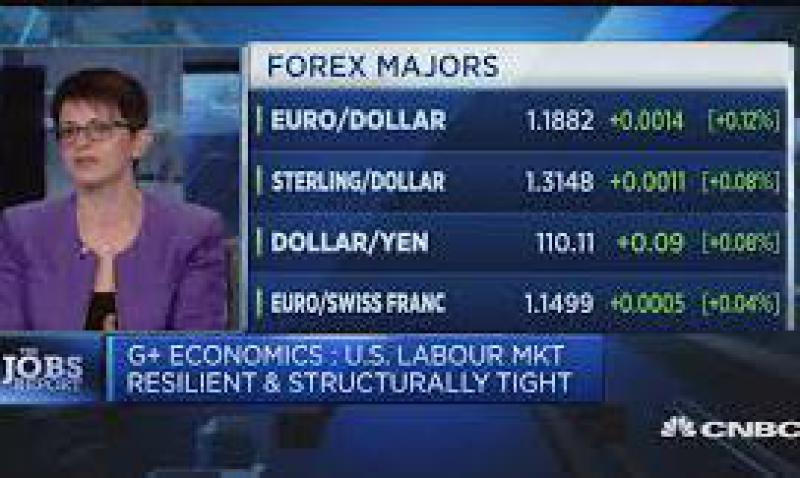 Markets are "married to 1987 models" of economic theory. Federal Reserve policy by contrast is "very much a function of 2007," and the direction after 2017 will be very different. Developments such as the "gig economy" and fintech have radically shaped the landscape of the economy. Lena Komileva talks to CNBC.

Portugal’s Jornal de Negócios: Komileva: ECB "will extend stimulus" beyond 2016 (10/06/15)
Interview with Portugal’s Jornal de Negócios: Lena Komileva recognizes that the ECB's measures are already having an impact, but doubts that inflation is headed to 2% with full employment in the Eurozone.
Portugal CFA article.pdf
Adobe Acrobat document [841.9 KB]
NEWS AND OPINION
CONTACT

BBC Radio 4 Today programme: “ECB to do whatever it takes” - Lena Komileva, chief economist and managing director of G+ Economics, discusses what the ECB is likely to do, when interest rates are already negative. "There is a general agreement that the ECB has to follow up on reassuring words with action, a broad range of a blend of action, rates, asset purchases, guidance, a promise to do what ever it takes - again. It's clear that the ECB's toolkit is rather maxed out," she told BBC Radio 4's Today Programme.(12/09/2019)

Bloomberg Businessweek: What a Yield-Curve Inversion Really Says About the U.S. Economy. A reliable recession indicator has lost some of its power to predict. (22/08/2019)

In my closing address to the 2019 #FXBUYSIDE Europe Summit I argued that markets face a web of geo-economic risks:
- Politics of debt
- Politics of FX
- Politics of protectionism
The war b/n reflationary fiscal deficits & contractionary econ wars will determine the growth outlook pic.twitter.com/rgoN4C0Pff

WSJ Pro: Where Do Markets Go From Here? Rally or Collapse, Warns Economist, From uncertainty to unpredictability, says G+ Economics By Jessica Fleetham (28/06/2019)

Marketwatch: Why the path for stocks and other markets now depend ‘critically on politics’ (10/06/2019)

Bloomberg TV: We Are in Extremely Binary Markets at the Moment, Says G Plus Economics’s Komileva (25/04/2019)